Three months after the murder of journalist Léo Veras, the investigations have not yet identified the person responsible for the crime. He was killed with 12 gunshots while dining with his family at home in Pedro Juan Caballero, Paraguay. On 01.May.2020, also in that city, policemen arrested Waldemar Pereira Rivas, known as “Cachorrão”, who had been on the run since February and is considered the main suspect in the involvement in Veras' death. He was detained after being recognized by Paraguayan police, after causing a traffic accident.

Taken the next day to Asunción, Rivas was charged by prosecutor Marcelo Pecci, who leads the task force investigating the case, for intentional homicide and criminal association. According to information, “Cachorrão” is part of the gang of drug traffickers of the PCC  operating on the border between Brazil and Paraguay.

He denies the crime and has already stated, in a radio interview, in Feb.2020, that he was a friend of the victim and that he could prove it. The journalist's widow and family continue to be escorted 24 hours a day by the Paraguayan police. She prefers not to comment on the case and awaits trial.

“Cachorrão” lives a few blocks from the murdered journalist's house and is the owner of the white Jeep Renegade, which has allegedly have been used to transport the three men who were at Léo Veras's house on the night of his execution. According to information, he would have a video to be presented in court to confirm his version: that he has a similar car and that he did not participate in the crime. However, until now, this video has not been presented to the Paraguayan Public Prosecutor's Office.

There is also information, not confirmed by the authorities, that he lodged one of the gunmen who broke into the journalist's home. Two entered through the front door and the third, who entered through the side street, ended up being shot by one of his cronies. Neighbours of the dead journalist saw the bandit being removed from the scene by the other two. His identity has not yet been revealed.

According to prosecutor Marco Amarilla, who is part of the task force, evidence is being collected and will be analyzed during the investigation. The next step will be the conclusive application, that is, the complaint against the accused who will be brought to court. Amarilla explained that, in Paraguay, the court has no popular jury, as in Brazil. The case will be judged by three judges, still in 2020, with the presence of a prosecutor and the defendant's defense. With security measures due to the covid-19 pandemic, Paraguayan justice is expected to return in the week of May 18, 2020. 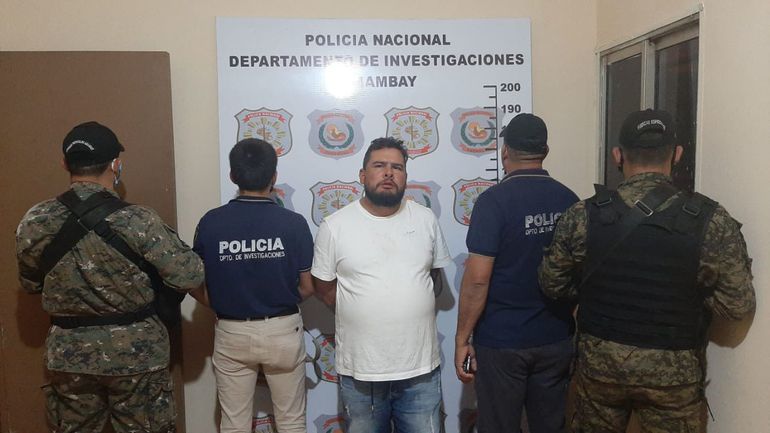 The prosecutor said that the involvement of Ederson Salinas Benitez, known as Salinas Ryguasu, head of the PCC in the region, was not ruled out. The drug dealer was arrested at dawn on Jan. 20, 2020, during a traffic fight that resulted in his arrest. After being overtaken by a driver cursing and showing a gun, Ryguasu went after the driver, cut his car and got out with gun in hand, shouting that he was the boss and was in charge in the area. The discussion was interrupted by the police, and he was arrested.

Upon arriving at the police station, he presented a Brazilian document with the name of Edson Barbosa Salinas and, as there was nothing in the police record, the judge on duty arbitrated a bail of R$ 80,000 to release him. The suspect would have been released were it not for information passed to the justice by the Federal Police. Federal Police agents, with the assistance of the Paraguayan police, confirmed that the Brazilian document was false and that the prisoner's true identity was Ederson Salinas Benitez, Ryguasu.

At the time, information circulated that Léo Veras was responsible for informing to the authorities the true identity of the drug trafficker. For this reason, Salinas Ryguasu allegedly gave the order to execute the journalist.

On March 11 2020, a habeas corpus benefited Ryguasu, and the drug trafficker left the Dourados State Penitentiary, where he had been imprisoned since Jan.2020, after presenting ten boletos that added up the bail amount, and being informed that he would have to appear every month to prove permanent address. However, according to the advisory of Judge Marcelo Guimarães, due to the security measures taken after the pandemic, this obligation is suspended. Justice in Ponta Porã, where he was arrested, is handling only the urgent cases of arrested defendants.

The murder of journalist Léo Veras is the third case to be included in the Tim Lopes Program, developed by Abraji, with support from the Open Society Foundations, to combat violence against journalists and impunity for those responsible.

In the case of crimes linked to the exercise of the job, a network of traditional and independent media outlets was activated to monitor the investigations and publish reports on the denouncements on which the journalist was working until he was killed. Part of the network today are: Agência Pública, Correio (BA), O Globo, Poder 360, Ponte Jornalismo, Projeto Colabora, TV Aratu, TV Globo and Veja.

The murder of broadcaster Jefferson Pureza, 39, in Edealina Goiás, on Jan. 17, 2018, was the first case followed up by the program. He was killed while resting on his home's veranda. Former councillor José Eduardo Alves da Silva, 41, was accused of being the mastermind and, in the 2019 trial, he chose to remain silence. At the time, the caretaker Marcelo Rodrigues dos Santos, 40, was also tried, accused of presenting to the councillor the minors involved in the crime. According to investigations, the murder was negotiated for R $ 5,000 and a revolver.

In a trial on December 9, 2019, a popular jury acquitted the two accused of involvement in the crime, despite recognizing their participation in the case and in the corruption of minors who committed the murder. The prosecution appealed for a retrial.

The second case is that of radio broadcaster Jairo de Sousa, 43, who died at dawn on 21.Jun.2018, with two shots to the chest when he arrived to work at Pérola FM radio, in Bragança, Pará. A suspected mastermind is councillor Cesar Monteiro. He reportedly hired a group of ten people to carry out the crime. According to the investigation records, the murder allegedly cost R$ 30,000.

In May 2019, city councillor Cesar Monteiro had his preventive detention revoked, after the Pará Court of Justice granted him a habeas corpus. However, on April 8, 2019, he was arrested again on charges of killing the radio host. There is still no date set for a popular jury.